Hey doods! Guess what time it is in MacStabby-Land? 0100 in the AM. Because CRIPES- I’m on nights right now. And last month I was working overnight every three days. It’s put quite the damper on my creative drive. Not the mind-process, just the actual getting-off-my-ass process.

Apologies in advance for the wonky spacing going on in this post- either wordpress is being weird or I am, I can’t tell. Annoying though, since I can’t figure out how to fix it!

Anywho, a few weeks ago was Memorial Day weekend here in the States, and I took the opportunity to build something AWESOME for my house/yard/mostly me. We’ve got a good-sized yard as Casa MacStabberson, and I’ve been wanting to try composting. We’ve certainly got enough grass-clippings from every time LSH mows the lawn, and enough dead leaves and things in the woods behind the house. SO, I went to the University of Missouri Extension Program site (I just googled “how to build a compost bin”) and started on this beauty.

Look, you guys! I used power tools! It was also approximately ONE MILLION DEGREES that day. Fahrenheit or Celsius, I can’t remember. At that temperature, it really doesn’t matter. It was hotter than Satan’s taint. 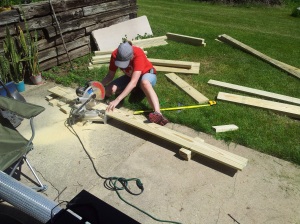 Choppity Choppity! My knees were SO sore after all this kneeling and sweating and whatnot. I was a sad panda.

The website had a full list of supplies needed as well as thorough directions for construction- for free! There were several options, but I chose the three-bin option, because I wanted a baller compost bin. We started construction up near the house, where the cords for the tools would reach, and then, when all chopping was completed, continued on down in the area where the bins would sit permanently.

You see the metallic screens on the boxes? That’s called hardware cloth. The directions say to “pull taut and nail down.” HAHAHAHA that’s funny. Because that shit basically does what it wants. I did my best, with LSH’s help, but super taut, it is not. Points if you can figure out what’s wrong in this photo, ha. Whoops.

Here’s the cloth in roll form- it had to be cut with a tin snips which was obvs SUPER FUN. 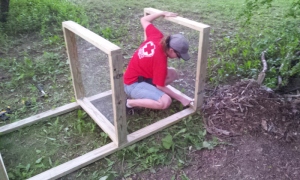 This ended up being a two-day project for me, because I had never done anything like this before, there was lots of hammering to be done by hand (why doesn’t LSH have a pneumatic nail-gun?) and it was hot as the dickens. Did I mention it was hot? Because it might have been a little warm that day.

Getting closer to being completed! 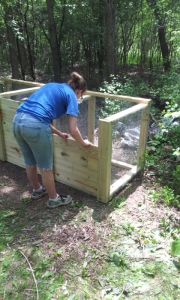 Inserting the fronty-door pieces. They’re removable for access to the bins for turning the compost. I have my very own pitchfork for this express purpose (not pictured). 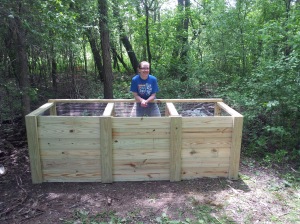 Completed! This was a cool thing for me- I’ve never done a project like this before, and doing something like this for our home was really satisfying. I’ve got several yard-mowings’ worth of clippings, dead leaves from last autumn, and am starting to put in foody bits. The next step to finishing will be the Optional Lids (to keep critters out.) I think I’m hot composting, because it’s warm in there when I turn my compost. It’s been pretty fun so far!

Also, I wanna give props/big-ups/many thanks to Oanh of Unique Schmuck for her info on composting- she’s done it for ages and had good tips. Mine of hers to share with you- apparently, newspaper will fix ANYTHING.

Have you tried composting or other ways to recycle yard waste?

6 thoughts on “Relaxation lesson number one: acupuncture. It’s great for your back and your rear. Needles in your face, pleasure in yo’ base.”