Hola erry-body. Long time no communicado, per usual. Well, things have been busy with work and such, so the crafting has taken a bit of a back seat to things like sleeping (also per usual.) I’ve been doing a bit of knitting ( posted on ravelry, but no photos on my work laptop to upload now) and re-working the cowgirl dress that I made during Sew Dolly Clackett last year. I finally decided to upload the old-ass projects I’ve had sitting around forever to ravelry, and since I’m finished-project-poor right now, I’ma show them here!

This big baby is from the book “Pursenalities”- it’s either the Blue Hawaii tote or the Sunset tote- I honestly cannot remember, because I literally made this more than ten years ago. Looking more closely, it appears to be the Blue Hawaii tote. I initially made it for my mom, but she doesn’t really use bags, so it’s still sitting around at my house. I still need to line it and get respectable handles.  Clearly it’s at the top of my priority list.

Here’s another one from approximately the Jurassic Period- 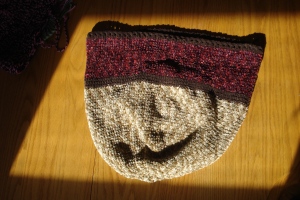 It’s from Knit.1, roughly 13 years ago. It ALSO needs lining and handles. I need to get my shit together and get these things done. Insert grumbli-ness here. 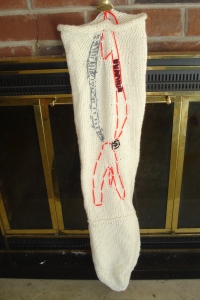 THIS BEAUTY is from my third year of medical school. During my surgery rotation, we had the option to do a humanities project instead of getting three H&Ps graded. Obviously, I chose to knit a gigantic christmas-type stocking and embroider a femoral-popliteal artery bypass, because DUH. Except the anatomy is wrong, so I think it’s actually more of a fem-tib, but I digress. I got graded on it and had fun. I keep thinking of putting it out at christmas, but have yet to actually do so. It’s roughly 3 feet long. There’s a photo somewhere of a girl from my med-school class wearing it like a mermaid tail.

This is the world’s largest crocheted cap. I was just winging the design as I went, and it ended up wayyyyy too big. I should probably donate it, but I feel bad because I don’t think the person’s been born whose head could actually wear it. 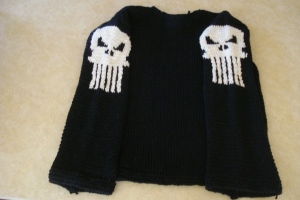 THIS is something I’m moderately proud of. It’s the Skully sweater from the first Stitch’n’Bitch book, modified to have the Punisher logo. I made it for LSH, but initally he didn’t wear it because the neck was too loose, so I tightened it. Then he wouldn’t wear it because the sleeves are too loose. They remain loose to this day. We argue over whether he’s worn the sweater zero times (me) vs one time (him.) I should probably also donate this one, but I just haven’t had the heart to do it, since it was my first sweater and I put so much effort into those logos.

I have signed up for something new though- Gillian of Crafting a Rainbow is once again giving out Sewing Dares, and I signed up! She took a gander through the blog, and my dare is to finally sew up that Vogue wrap dress inspired by the Diane Von Furstenberg exhibit I visited at LACMA last year. It’s on like Donkey Kong! (soon.) I’m pretty excited to give this a try.

What new, exciting crafty projects have you been  dreaming of lately?

6 thoughts on “Why don’t you try speaking in words, instead of your damn dirty lies!?”