Hellooooooo! Apparently it’s been a year and a half since I last posted. Well, I’m sure all two of you have been VERY WORRIED. Have I stopped making things? No. Did I slow down a bit? Sure. Life has been busy (which it is for everyone, so that’s the dumbest excuse ever.)

I’ve got my first big-girl job. I moved 4.5 hours from where I lived before; we bought a house before we sold the old one! LSH had been painstakingly renovating every last damn thing in it. It’s finally done and is on the market! In the meantime, however, we’ve been living apart from mid-September to last week. UGH. It’s so nice to have him back.

I’m starting to plant little roots here; I joined a running club, and hang out with the other two new doctors at our practice.

SO- that’s life in the shortest little nutshell ever.

Let’s start catching up on some stuff I’ve made, shall we? (We shall.)

Last year, my final of residency, I finally got in on the Secret Santa the clinic did. I did handmade gifts- microwave bowl holders, and some themed cloth coasters.

I also made a rice-filled heating roll, but somehow there is no photographic evidence that it exists. I promise that it does, though.

As long as we’re doing Christmas gifts, let’s continue on to what I’ve made The Nugget for the past couple of years. Each year, I give her a stack of books and one handmade item. (Her birthday and xmas are one week apart). Luckily, she likes books, because she’s going to get them regardless of whether she likes them or not. I’m not an auntie to any dumb babies! 😉 Like most other small girls within the past forever, she loves the movie “Frozen.” And, also like most other small girls, she likes Elsa best, even though Elsa was just a whiner who went to go mope in her ice castle, while Anna went about adventuring to bring her back. #AnnaForever

So, last year she got her very own Elsa Dress! I can’t remember which pattern I used, but it’s whatever Big Four pattern had her size and the licensing, I guess. She absolutely loved it, and may or may not have worn it to Target later that day. 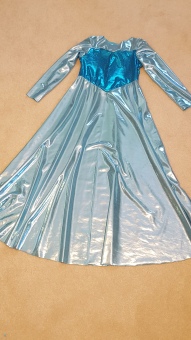 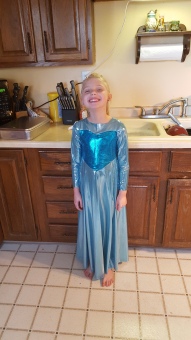 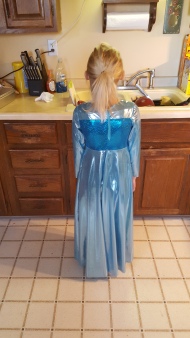 Instead of using the fabrics recommended (you know, fancy stuff that shreds a lot), I used stretchy, performance-type knits from Joann. This way I got to avoid inserting an unnecessary zipper, and also didn’t have to do bothersome things like hemming or finishing necklines. WINNING.

This past year, in addition to her normal pile o’ books, I decided to make her a mermaid tale blanket based on this pattern. It took ages longer than I planned, and was actually about two months late for her birthday. WHOOPS. Well, since I’d moved, I got to mail it to her, and she got the fun of getting a package in the mail.

My sister told me she refused to take it off at all that day, and hopped around like she was in a sack race, in between flopping on beds and “flapping her tail.” Another win!

Well, that’s the most I’ve written in a million years! I’ve got several other projects to post from my backlog- hopefully it won’t be too long till I get around to making another entry here!