Been a little slow on project completion this week; I haven’t gotten any farther on the Pencil Skirt Sew-along, but I may just not follow the dates set for that, since I’m traveling a bit this month and next month. I DID, however, have a chance to watch three of the four existing Twilight movies and make fun of them with some friends whilst crafting. Behold, the fruit of my labors: 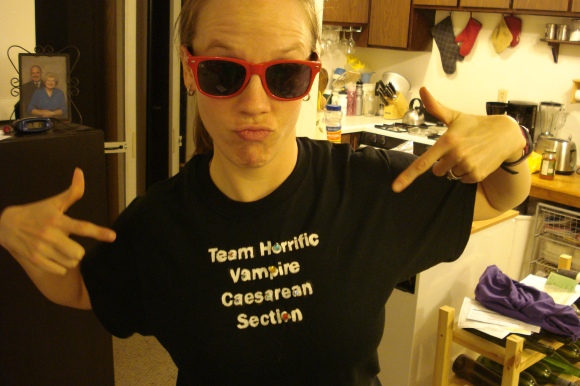 Sorry about the continuation of poorly-lit photos- The Hubs does the best he can, but the light in our apartment is so darn yellow, and it gets dark outside at, like, 430 pm. Anyhoodle, the plan was to decorate t-shirts to wear to the next Breaking Dawn or whatever movie, so we all had t-shirts to play with during our viewing party. I can’t go to the new one, because I’ll be at an interview in Michigan, but I wanted to make a shirt anyways. I just printed up the words, cut them out with an X-acto knife, and used the paper as a stencil. I wish I’d had some posterboard, as I may have gotten less leakage around the letters, but oh well. How often am I gonna wear this thing anyways? And you may have noticed- it’s bedazzled. Twilight t-shirts deffo need to sparkle like the vampires in the stupid books/movies.

However, after 6 hours of watching Twilight, we came to the general consensus of, “IT’S NOT FUNNY ANYMORE.” I mean, how much crap acting and bad wigs can we be expected to take? NOT that I think all the actors are bad- I think they’re doing the best they can with shit source material. But really! It’s all so terrible.