Hello friends! Well, so much for my mental goal of doing one post per month. That blew by me really quickly. Silly human. I’ve had these photos ready for probably about one month, but didn’t feel like blogging them. The photos themselves are awful- so awful that they’re kind of funny, so I’m not re-doing them.

Note- this is what happens when you try to take photos after a 24 hour shift. I mostly look like I’m still asleep.

This project is just a slight re-tooling of the dress I did for #SewDollyClackett last year. It’s the Butterick 5748 with sassy pin-up cowgirls. After wearing it several times, I realized the fit wasn’t quite comfortable enough to wear regularly- the front gaped, and the shoulders were too wide. I have kind of sloping shoulders, so this is a fairly regular occurrence for me with strappy dresses and bras and such. You can see some of the gaping here, and how near the edge of my shoulders the straps get.

I decided to take the top off and re-do it since I had some fabric left. I ended taking a whole bunch out of the front (I’m remembering, like, 7 inches, but it really almost has to be 7 cm because inches would be INSANE.) and graded to nothing at the waist. I took the top apart to do it properly. I even traced, you guys! #progress

There’s a lining to the top, but instead of redoing all of that, I just zipped up the center with my new measurements to save some time. I didn’t end up understitching because I had trimmed the seam allowance the previous time I made the top, so I ironed the bejeezus out of it to keep it down. The lining may still roll out a bit; I’m not sure. If it does, I’ll top-stitch it down at some point. 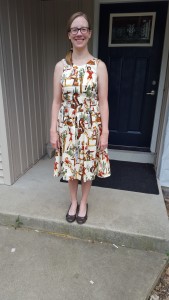 As you can see, the straps aren’t sagging off my shoulders, and the front isn’t gaping! Hooray! Doing these adjustments to the front somewhat changed the shape of the neckline, but not enough for me to fuss about it.

From the side, it doesn’t look much different than the first version. The real difference is in how it feels when I wear it (SO much better.)

After I got the top done, I just reattached the skirt without any changes, and put in the zipper again (hand-picked, because why not?)

I did notice some fitting issues with the back that I didn’t appreciate on the first version, but were probably there. 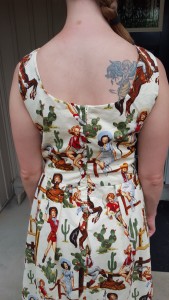 There are some wonkus, wrinkly bits that came from somewhere. I’m not sure if it’s from not getting my fabric perfectly on grain, or a sewing issue, or if something like a swayback is part of the problem (I am not totally sure what a swayback and its adjustment means/entails.)

That’s really a bummer, because it put such a damper on a project I was really happy with until I saw it. Grumble.

Well, that’s pretty much the deal for now. Stay tuned for whenever I happen to finish another project, bwahahahaha.

I had to leave this one in because it was so bad- THANKS FOR TELLING ME YOU WERE TAKING THE PICTURE, LSH! So sleepy.

Anyone have any tips for that mess on the back of this otherwise super-fun dress? I’d really appreciate it!

3 thoughts on “Your collective dating record reads like a who’s who of human crap!”